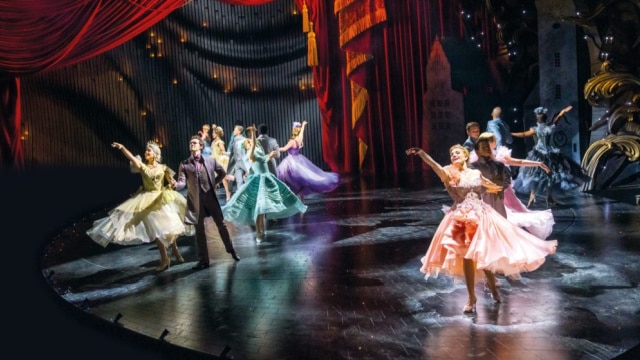 The story of Cinderella follows the classic fairy tale closely. This guide explores what happens in Act I and Act II of the musical, the songs in the musical.

Cinderella closed on 12th June at the Gillian Lynne Theatre after being deemed a ‘Costly Mistake’.

The first act is mainly focused on introducing the characters and setting up the story.

When the Fairy Godmother appears to help Cinderella, she gives her a magical coach and dress and sends her to the Ball.

Act II of Andrew Lloyd Webber’s Cinderella stage musical is a whirlwind of emotions and a darker, more intense Act than the first.

Prince Sebastian must pick a bride before midnight of the Ball. Cinderella arrives unrecognized and confesses to the Prince that she loves him. The Prince fails to recognize her.

It becomes increasingly difficult for Cinderella to walk in her tight heels. At the moment, the stepmother and the stepsisters recognize Cinderella.

Adele is forced by the stepmother to kiss Sebastian at midnight. She is declared the bride by the Queen. When Sebastian recognizes Cinderella, she is already heartbroken. Sebastian is astonished that she felt so hurt.

The Stepmother dwells that her plan has succeeded, while Cinderella laments the loss of the man she loved. She decides to leave Belleville, but her friend, Marie, advises her to plot how she will disrupt the wedding.

During the wedding, Prince Charming comes to the rescue of Sebastian, and the wedding is stopped.

The Prince shows up at Cinderella’s home but only finds her slippers. Fortunately, Cinderella goes back for the crystal slippers. The Prince explains what happened to Cinderella, and the two both realize there was chaos and confusion and agree to flee together.

Songs in Act I and Act II

The following are the songs in Act I of Andrew Lloyd Webber’s Cinderella:

The following are the songs in Act II of Andrew Lloyd Webber’s Cinderella: