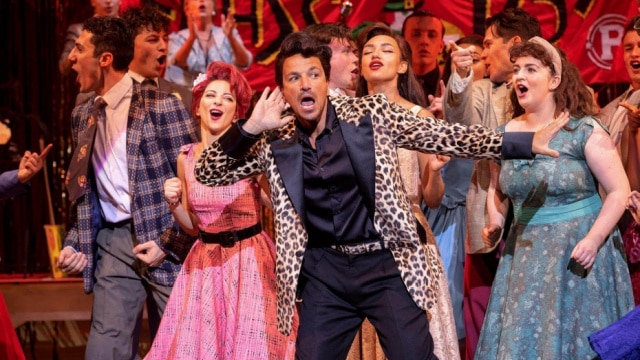 The Ultimate Guide to Grease The Musical at The Dominion Theatre

The hit musical Grease has returned to London!

First seen in the West End way back in 1973, the Warren Casey and Jim Jacob’s iconic 50’s musical played at the New London Theatre. The 1973 cast included Richard Gere as Danny Zuko and Stacey Gregg as Sandy.

In 1979, they revived the show at the Astoria Theatre and later made another London revival in 1993 at the Dominion Theatre. Once again, the world’s beloved musical is making an appearance in London in the West End for 26 weeks. Since we know you’re excited to watch the musical, here is our guide to Grease the Musical.

What is Grease the Musical About?

Grease the Musical follows the whirlwind summer romance between Danny Zuko and Sandy Dumbrowski. Named after the 1950s United States working-class youth culture known as greasers, the musical is set in the fictional Rydell High. While it’s named after rock singer Bobby Rydell, the school is typically based on William Howard Taft School in Chicago.

The musical is set in California 1958, and greaser Danny and girl-next-door Sandy meet one summer and fall in love. However, luck is not on their side as they had to say their goodbyes after spending a wonderful summer together.

Luckily, Sandy moves to a new area and enrols at Rydell High. What she doesn’t know is that Danny also attends Rydell High. At Rydell High, Danny is the leader of the T-Birds. They are a group of black leather jackets wearing greasers. The too-cool-for-school greasers are acting tough and stealing hubcaps.

While Danny and Sandy had a secret romance in summer, back in high school, peer pressure and cliques make their love complicated. Can Sandy continue maintaining her good girl status? Is a radical transformation the only way Sandy can win Danny’s love? Can Danny and Sandy survive the trials of teen love?

The musical features hit songs such as, “Mooning”, “We Go Together,” and “Greased Lightnin.” This new version has already proven to be a hit so, get ready for an electrifying performance.

Who Is Directing Grease the Musical 2022?

Nikola Foster will be directing Grease the Musical 2022 UK version. Born in Copenhagen, Denmark, Nikola is an Artistic Director of Curve. He grew up in North Yorkshire and trained at the Crucible, Sheffield and Drama Centre, London.

At Curve, he directed Manchester Theatre Awards, Douglas Day Stewart’s An Officer and a Gentleman, and Joe Orton’s What the Butler Saw. Nikolai also directed Riaz Khan’s Memoirs of an Asian Football Casual, Oscar Wilde’s The Importance of Being Earnest and many more.

He served as an Associate Director at West Yorkshire Playhouse in Leeds where he staged the following:

However, his critically acclaimed production is Annie the Broadway Musical.

Warren Casey and Jim Jacobs wrote the 1971 Grease musical – book, lyrics and music. The duo previously acted in several shows at the Chicago Stage Guild. They also collaborated on another musical set in 1950s Chicago.

This musical follows ten working-class teenagers as they navigate love, and other complexities. The original production was raunchy, vulgar and aggressive. However, subsequent productions sanitized and toned the musical’s theme down.

The new version mentions social issues affecting the 21st-century teen. They include:

Who Are the Characters in Grease the Musical?

The following are the characters in Grease the Musical.

Danny is an 18-year-old teenage boy with thick black hair, blue eyes and lots of hair grease. As the founder of the T-Birds, he is mostly seen wearing a black leather jacket, black jeans, black belt, black penny loafers with black or white socks.

His hair is done up in a popular greaser style from the 1950s. As the leader of the Burger Palace Boys, he influences several events at the school. This is because his peers listen to what he tells them.

Sandy is a beautiful Australian teenage girl with blue eyes, blonde hair and a fair complexion. Her family moved to America from Australia where she gets to meet the love of her life, Danny.

She is good natured and has a sweet personality. Deemed too pure by the leader of the Pink Ladies, Rizzo, she changes her image into a rebel-like appearance. After meeting Danny during summer vacation, she never knew his true personality until they met again in Rydell High. To win Danny’s love, Sandy transforms her look and personality and finally becomes a fellow greaser.

Betty Rizzo is best known by her surname, Rizzo. As one of the main characters in the musical and the movie, she has hazel eyes, a fashionable sense of style but is not bright. However, she is cheerful and often wears revealing and tight apparel showing the shape of her body.

As the sarcastic leader of the Pink Ladies, she chain smokes and does not care what other people think of her. She is Sandy’s former frenemy and the girlfriend to Kenickie, another main character.

Kenickie is Danny’s best friend and also the second in command of the T-Birds. He is always sporting the typical greaser attire that includes dark blue jeans, a bluish-white T-shirt, and black engineer boots. He also wears the signature black leather jacket with a white T-Birds logo and a golden necklace.

Since he is a T-Bird, Kenickie hides any soft emotions such as kindness and caring for others. He has a strong voice and also smokes. Kenickie spends a lot of time with his best friend as well as with his car, Greased Lightning.

Frenchy is a young woman with a slight peach skin tone, curly red hair and brown eyes. This fun loving and bubbly woman is a member of the Pink Ladies. In the musical and movie, she drops out of high school to enter beauty school and become a beautician.

However, she dropped out of beauty school after her hair turned pink in a tinting class. Besides the hair incident, she struggles with her lessons at the beauty school. She is friends with Sandy and gained her nickname Frenchy by french inhaling a cigarette.

Charlene is a secondary antagonist in Grease and the best dancer at St Bernadette. However, she had the worst reputation according to Frenchy. She was the girlfriend of Lel Balmudo, and Danny describes her as an old family friend.

In the movie, Annette Charles portrays Cha-Cha. Sadly, she passed away in August 2011. Katie Lee plays Cha-Cha in Grease the Musical 2022 UK version.

Who is in the Grease UK Cast?

Dan Patridge will portray Danny Zuko, the charming greaser and leader of the T-Birds. Olivia Moore will play Sandy Dumbrowski, a good girl who eventually becomes a greaser after meeting and falling in love with Danny.

Jocasta Almgill will portray Betty Rizzo, the chain smoking leader of the Pink Ladies. Other Pink Ladies cast members include Eloise Davies as Frenchy, Mary Moore as Jan and Lizzy-Rose Esin-Kelly as Marty.

The T-Bird members include Paul French as Kenickie, Damon Gould as Sonny, and Jack Reynolds as Doody. TV personality and singer, Peter Andre will make his debut in Grease the Musical as Vince Fontaine.

Andre said the following after the announcement, “I am beyond excited to be making my West End debut playing Vince Fontaine in Grease. The musical is an iconic show, and we can guarantee the audience will have the most wonderful evening listening to songs we love.”

Other cast members include:

The ensemble will feature:

How Many Songs Are There In Grease The Musical?

The classic Grease the Musical is popular for its catchy songs. In the original movie, there were 12 popular songs with infectious high school energy. These songs captured the 50’s America.

The original score calls for drums, bass guitar, two guitars, two saxophones and a piano. As the version licensed for performance, it also calls for 8 singers – 4 males and 4 females. The first keyboard and piano are usually played by the band’s conductor while the two guitarists double on electric and acoustic.

In the 1993 West End revival, there were 21 songs in Grease the Musical. This is the same number of songs for the 2022 UK performance. However, the list of songs changes ever so slightly. However, you can expect to listen to your favourite Grease songs such as “Summer Nights”, ”Mooning”, and “Summer Nights.”

What Songs Are In Grease?

The following songs are in Grease.

In the 1993 West End revival, the cast sang “Finale” and not “Grease Medley.” “We Go Together,” sung by the Pink Ladies and T-Birds, was only sung in Act I in the 1993 revival. But in the 2022 performance, the cast sings the song in both Acts I and II.

Where Is Grease the Musical Showing in the UK?

Grease the Musical is coming to the Dominion Theatre in London in 2022. This follows a recently highly acclaimed tour. As one of the first new productions of Jim Jacobs and Warren Casey’s iconic musical Grease will tour the UK in 2022.

Directed by Nikolai Foster, the musical arrives in the West End for 26 weeks starting from May 2022. The Dominion Theatre is a West End Theatre and the former home to the long running musical, We Will Rock You.

Construction of the theatre started in March 1928 with a budget of £460,000. The theatre’s site was the location of the former Horse Shoe Brewery site. This 2,069 theatre has two tiers of galleries and still retains its 1920s art deco plasterwork and light fittings. The Dominion Theatre is at the end of Oxford Street, close to Centre Point and St Giles Circus.

How Long is Grease the Musical?

The running time of Grease the Musical at the Dominion Theatre is 2 hours and 30 minutes with an interval of 20 minutes. The musical will be back in the West End for 26 weeks and will take place every day except on Sundays. For the complete showtimes and performance schedule, head to the Grease The Musical site.

Fun Facts About Grease The Musical

Grease the Musical got its name from the 1950s penchant for greasy engines, greasy food and greasy hair. The title was a way for the creators to pay homage to the 50’s era.

Grease used to be grittier, vulgar and raunchy. The original 1971 stage production contained raunchy teenage antics and profanity. But later in later productions, they toned down the profanity and raunchy antics.

Did you know that the Fonz almost played Danny Zuko? Paramount Pictures originally wanted Happy Days star Henry Winkler as Danny, but the actor did not want being typecast. So, he declined the role.

Jeff Conaway, who portrayed Kenickie in the musical, was already a Grease alum. On Broadway, he played Danny Zuko along with Patrick Swayze and Richard Gere. But in the film, he got the role of Kenickie.

While filming Grease the Movie, the primary cast was too old to be in high school. However, Randal Kleiser, the director, administered a crow’s feet test around the eyes. This was to make sure the cast could pass for teens.

In the movie, there is a scene where John Travolta as Danny pulls out saran wrap during the Greased Lightning song. This is in reference to condoms.

How To Get Grease The Musical Tickets

So, if you don’t want to miss Peter Andre’s performance as Vince Fontaine, book your tickets now!