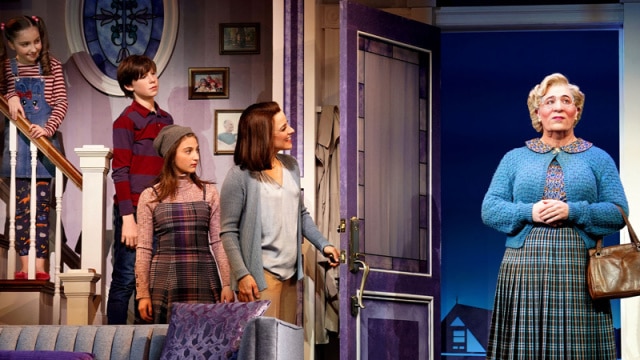 Mrs Doubtfire, a musical based on the 1993 film by the same name, is coming to the UK in September 2022! Producers Jamie Wilson and Kevin McCollum announced that the musical will begin performances in Manchester on 2nd September 2022.

The Story of Mrs Doubtfire

The musical comedy is an adaptation of the 1993 popular film starring the beloved Robin Williams as Daniel Hillard. It also starred Sally Field as Miranda Hillard and Pierce Brosnan as Stuart Dunmeyer. The movie tells the story of divorcing parents in the 90s.

Following the split of their marriage, out of work voice artist Daniel Hillard struggles to be away from his three children. To spend time with his kids, he opts for an unorthodox choice – to become a housekeeper. Fortunately, his ex-wife, Miranda Hillard, unknowingly hires him.

Daniel’s alter ego, Euphegenia Doubtfire is a Scottish nanny. The new character takes on a life of its own and teaches Daniel more about being a father. This hilarious and heartfelt film made $441.3 million at the box office against a budget of $25 million. Today, it’s easily one of the best movies ever made.

The cast of Mrs Doubtfire the Musical UK is yet to be announced. However, Jerry Zaks, a four-time Tony Award-winning director, brings the smash-hit musical comedy to the stage. Original lyrics and music are by Karey and Wayne Kirkpatrick. Both are Tony award-nominated creators behind Something Rotten!

Scenic design is by David Korins, music supervision by Ethan Popp and choreography by Lorin Latarro.

Mrs Doubtfire the Musical will start its UK season at the Opera House, Manchester from 2nd September to 2nd October. There will be a total of 34 shows. Tickets are on sale now.

Recommended for adults and kids, Mrs Doubtfire the Musical is a real treat for the entire family, and we look forward to welcoming it to the UK.