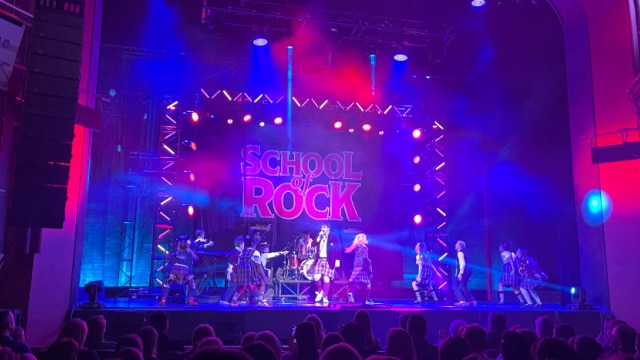 Andrew Lloyd Webber is one of the most successful composers in theatre history. His productions have been seen by millions of people and won him some of the most prestigious awards in the industry.

In 2003, he created School of Rock  a musical that tells the story of Dewey Finn, a washed-up rock star who takes a job as a substitute teacher at a prestigious prep school. Despite having no teaching experience and little patience for children, Finn quickly discovers his pupils’ musical potential.

School of Rock the Musical is currently on Tour in the UK and we managed to watch the production at Norwich Theatre (and we weren’t disappointed!)

The stand out performances were by Rebecca Lock (Mrs Mullins) for her incredible emotional performance of ‘Where did the Rock Go’ and Matthew Rowland (Ned Schneebly) for his incredible comedic timing!

What is School of Rock the Musical About?

Act I kicks off with ‘No Vacancy’ band performance. Dewey Finn, the guitarist for the band, plots to steal the show and detract the lead singer. The band concurs to eject him out of the band instead.

Dewey gets thrown out of the band at the peak of a dream to become a superstar. Even worse, he is fired from his job at a record store.

At Horace Green School, activities continue as normal. The principal greets parents as they drop off their children at school as normal. However, Dewey (Ned) arrives at the school Inebriated and unprepared, forcing the principal to warn him that he must adjust to meet the school’s standards.

His first day at the school is a total mess. He can’t adjust to the tight standards of the school. He gets upset about the rigid system in the school when one of his students tries to explain how the classes are run. When Dewey lacks food to satisfy his food cravings, he spends the better part of the day sleeping.

Dewey gets back home and tries to convince Ned to get back to his music career when Patty arrives home from a jog and reminds Dewey of his overdue rent. Angry for the unpaid bill, Dewey brutally torments that Dewey will never succeed in the rock business if he doesn’t make the payment.

The following day, Dewey learns that his students are part of a music class and is excited to know what instrument they play. Eventually, he forms a new band with his students and assigns all the required roles to the most desirable students.

Meanwhile, the students are frustrated that they have so much to tell and offer their parents, but their reportedly ‘busy’ parents assume all they say. Later at school two students, Marcy and Shonelle, agree that they should call their new band ‘School of Rock.’ The mastermind behind the group, Dewey, is delighted, and he crafts a song to show his preparedness. The students practice the song in the classroom, and Dewey assures them that they’re doing fantastic.

Dewey and his students are stuck at school and fear they’ll miss the auditions. Their last resort is sneaking out of school. Unfortunately, they arrive late at the Battle of the Band, but they’re allowed to perform thanks to the lame excuse by summer. As per their expectations, they qualify and are filled with excitement.

Meanwhile, at the faculty meeting, Rosalie stresses the need for a night event with the parents. Going back to class, Tomika gathers her courage and informs Dewey that she wants to sing and impressively, she does so and thrills her audience.

When the students learn that Rosalie is coming to class, they hide their instruments with thanksgiving items, but Rosalie challenges this. Dewey defends himself, saying teachers at the school need to improvise better methods for teaching boring subjects. A heated argument proceeds between Rosalie and Dewey until Dewey finally asks Rosalie out at a bar to cool things off. After some drinks, Dewey plays a song by Stevie Nicks, making Rosalie realize that she lost her inner music. Dewey promises that if the parents’ night goes as planned, she will help Dewey’s band go for the auditions. The rock star is impressed, he kisses her, and they go separate ways.

Dewey makes his rent payment to Ned and explains his impersonation plan. Ned panics but Dewey explains everything, and he calms down. He also promises to keep the information a secret and not inform Patty. Students rehearse their song the next day when Rosalie brings the parents to the classroom. The parents are delighted by what they see until Ned and Patty come in, revealing the whole Impersonation plan. The delight turns into rage, and things heat up. On the verge of the commotion, Dewey and his band get away to perform at the auditions.

School of Rock arrives at the Battle just when ‘No Vacancy’ finishes their performance. Dewey, who had previously panicked, gets the much-needed rejuvenation when the students plead that they need him. He agrees that the band performs Zack songs and uses the new costumes by Billy. Parents arrive at the Battle but are not allowed backstage by the security guards.

When the band performs Zack’s song, the crowd goes berserk with excitement. At the end of the performance, Zack’s father is filled with pride, and the parents congratulate their kids for the electrifying performance.

Later, the competition winners are declared as ‘No Vacancy.’ However, Dewey tells the band that winning was not their main goal; the crucial thing is that they did something extraordinary. Patty tries to get Dewey arrested, but Rosalie convinces the police officer that Dewey is the school band coach. After performing an encore to keep the audience entertained, Dewey kisses Rosalie again. Rosalie does her classical singing and merges it with the band’s rock singing. The songs imply that Horace Green will be revolutionized now that Dewey and School of rock did something great.

An outstanding production with a fabulous cast! I highly recommend booking tickets to see the show during it’s UK Tour.